This morning we executed a motley assortment of tasks that are sure to come in handy in the coming weeks:

1. Tomato Concasse’: concasse’ refers to anything that is peeled, seeded, and chopped. It can be done with cucumbers, melons, squash, peppers etc., but tomato concasse’ is especially particular in French technique, and has the additional step of being blanched and shocked in order to peel it.

2. Roasted Red Peppers: straight up on the gas burners. Char the hell out of them, steam in a covered bowl or paper bag for a few minutes, and then remove skin with a paper towel.

3. Clarifying butter. Removing the milk solids from butter. Turns out that this doesn’t increase the smoking point of butter, but does increase the time you have to cook with it before it turns brown. There are many uses for brown butter itself, but clarified butter works in those instances when you don’t want dirty brown butter pieces clouding up your brilliantly sauteed piece of…whatever.

4. Croutes and Croutons. Croute is just a bigger crouton. Once you’ve tasted fresh bread cubes sauteed in butter, you will never dare eat those croutons out of the box again. 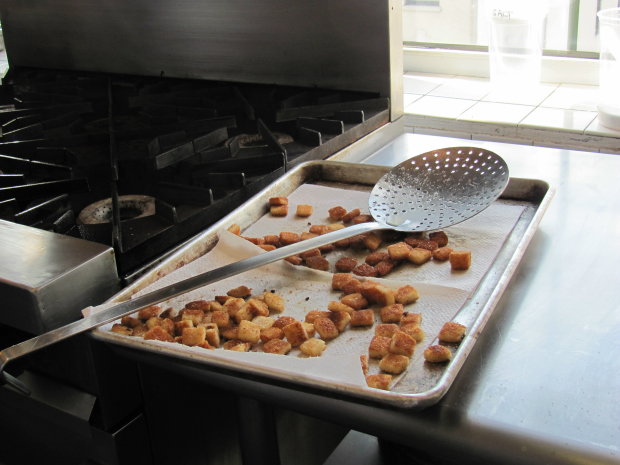 5. Polishing copper bowls. Chef Allen was very adamant that we learn to do this, even though it’s not in the curriculum. Apparently egg whites are more awesome when whisked in copper bowls, ergo:

6. Whipping egg whites. Even with the fancy copper bowls and huge springy whisks, my right bicep is still sore. But yes, I was the first to achieve stiff peaks, huzzah! 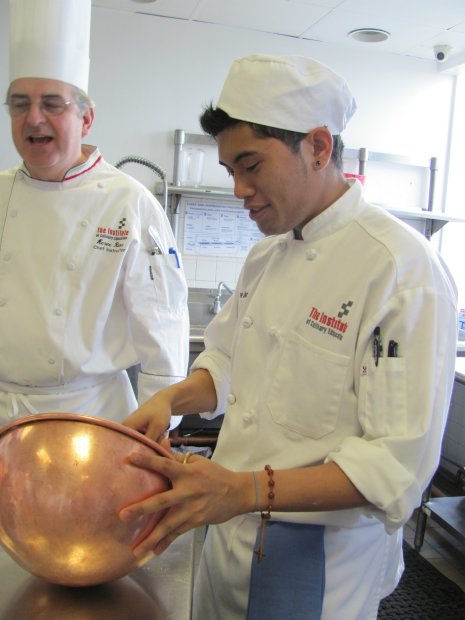 And in the vein of “tidbits” here are a few other tasty morsels of thought process as regards culinary school:

1. My tolerance for pain is increasing. Aluminum bowls right out of the dishwasher are about 190 degrees. I used to have to use my side towels to pick them up, now I don’t.

2. My enthusiasm for volunteering to try something first is decreasing. Chef would demonstrate a technique, and then let us to it. In my zeal to be among the first to prove myself, twice today whatever it was I went after was taken from my hands so that the Chef could continue to demonstrate it, while I stood there, frustrated, really wanting to be like “okay, okay, I got it, let me do it,” but knowing I can’t because:

3. The whole “yes chef” mentality. In actually I kind of dig the deference and respect aspect to kitchen behavior, so long as it isn’t being paid to an out-of-control ego. But even early on it’s clear that the only appropriate response to anything from a compliment to a reprimand and everything in between is “yes chef.” Even if it contradicts something another chef told you, or what’s in the reading material, or if you desperately want to point out that you’re not getting a chance to practice because the chef keeps whisking your egg whites away from you.

This entry was posted in Uncategorized. Bookmark the permalink.